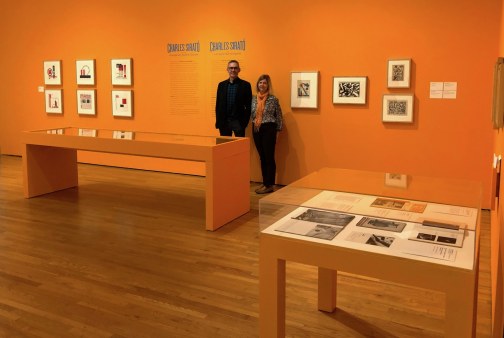 Charles Sirato and the Hungarian Avant-Garde

By the time the Hungarian poet Tamkó Sirató Károly (1905-1980) arrived in Paris in 1930, he was already a modernist steeped in avant-garde ideas. From a young age, Sirato’s interests reflected twentieth-century alternatives to conventional thinking: he was as captivated by philosophy, geometry, physics and biology, as he was by Constructivism, Surrealism, Futurism and Dadaism. He also had a deep interest in Buddhism.

At age twelve, Sirato discovered his talent for poetry. At seventeen, influenced by avant-garde periodicals such as those edited by Lajos Kassák, Árpád Mezei and Tivadar Raith he wrote, “It was my ambition to challenge the thus-far existing limits of poetic expression and express more with words than just ideas.” Inspired by Kassák’s képversek (picture poems), in these early Hungarian poems Sirato strove to fuse the visual with the literary, to break through the confines of traditional poetry imposed by the line. He was inspired by cinema, the dynamism of the modern city and the electric billboards and traffic signs that began to appear in Budapest, and his Hungarian peers who published innovative magazines in Budapest and Vienna. With a close circle of poet-friends, he explored a new direction in poetry, defining it as “Glogoism,” a term derived from the ur-Slavic verb glogao, to speak. In 1928, he published a volume of his planar poems titled Papíember (Paper Man) and the Glogoist Manifesto, calling for poetry to leave the line, to engage with a new “pictorial vision” of two-dimensional art but three-dimensional poetry. Attacked by the conservative press, Sirato turned to a study of literature and the avant-garde and set off for Paris where he became part of the Hungarian circle at the Café du Dôme and wrote and published his Dimensionist Manifesto.

This exhibition was shown at the Zimmerli Art Museum of Rutgers University, within “Dimensionism: Modern Art in the Age of Einstein” curated by Dr. Vanja V. Malloy. This section of the exhibition is drawn from the collection of The Salgo Trust for Education.