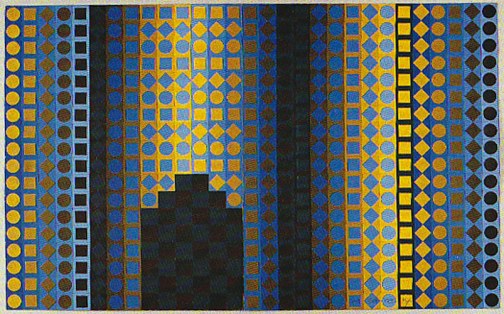 This untitled collage by Victor Vasarely, which dates to the early 1970s, offers an example of the artist’s unique model of geometric abstraction. The work, which has been described as stage scenery, comprises an ordered configuration of circles, squares and diamond shapes in vertical succession. Dark block-like shapes that reference architectural form and accentuate the illusion of space accompany this geometrical, grid-like patterning. Here, one might imagine geometrically adorned pillars behind a stepped-skyscraper silhouette. Vasarely has employed a cool palette of blue, yellow and brown in contrasting color pairings. Vasarely’s works often seem to contain their own light source, as though illuminated from within. In this work, one may perceive undulations of light across a wavy backdrop of geometric forms, creating the perception of depth and the illusion of movement within an otherwise static two-dimensional surface. The piece encompasses a playful, engaging quality common to Vasarely’s oeuvre; as a result, the viewer maintains an active role in the experiential process of the art.

Victor Vasarely was born in Pécs, Hungary in 1906. After briefly pursuing medical studies in the late 1920s, Vasarely turned to art practice. From this early experience, it has been said that the artist adopted a science-informed inclination toward objective, method-driven and universal understanding. Vasarely attended the Academy of Art in Budapest from 1925 to 1927 and then trained under Sándor Bortnyik at the Mühely [Workshop] (also called the ‘Budapest Bauhaus’ due to its kinship with the Bauhaus at Dessau) in 1929-30. Subsequently, Vasarely carried out graphic design work in Budapest and continued in this field upon his relocation to Paris in 1930. His early graphic works, such as Zebras of 1933-38, employ patterns copied from nature. Between 1935 and 1947, Vasarely experimented with Cubism and Surrealism. After the Second World War he developed a theory and style of art that drew upon the geometrical abstraction of Malevich and Mondrian. Like them, Vasarely sought to break from established practice and create a new universal system of art. Vasarely’s outlook at this time is well expressed by the Benezit Dictionary of Artists: “[he believed] that the modern world required a syntactical experimentation with shape and colour, scientifically controllable, essentially appealing to feeling, not exclusive of notions of harmony, but rejecting any psychological context.”

Vasarely began to experiment with optical effects through black and white abstract paintings and prints in the late 1940s; he subsequently introduced color to this practice. Around 1955, he developed his theory of plastique cinétique (“visual kinetics”), which referenced the theorizing of Bauhaus professors Moholy-Nagy and Josef Albers, and focused upon the act of looking. During this period, he exhibited alongside kinetic artists such as Calder, Duchamp, Man Ray, and Tinguely at the Denise René Gallery in Paris. Vasarely became associated with the Op Art movement of the 1960s. The artist also developed his Alphabet Plastique (Fine Arts Alphabet) in the 1960s, a language of color and form composed of unités plastiques (geometric units with specific color relationships). Vasarely’s ordered, geometric abstractions – as seen in the featured work – relate to matrix-based computer programming systems. He conceived of his art as constructed with a set of elements, so as to be easily codified, reproduced, and disseminated. In forming this idea, he drew upon nature – particularly at the cellular level – as a model. His theory incorporated the concept of “multiples” – that his art could be created by anyone willing to follow his designs – and his works were planned so that they could be prefabricated with industrial materials and easily integrated with the built environment. This notion reflects processes of mass media. And indeed, Vasarely achieved widespread renown by the 1960s and his work became widely circulated in a variety of popular culture forums including fashion and advertising. The artist incorporated a social aspect to his aesthetic theory; he desired for his art to reach beyond the “privileged élite” and modify both the physical surroundings and the mindset of all humankind. The artist’s vision involved a concern with both everyday existence and the greater, metaphysical questions of life. As Michèle Vasarely has explained, Vasarely’s work of the late 1960s “attempts to evoke the unattainable universe of galaxies, the gigantic cosmic pulsation, and the biological mutation of cells.” We might consider the illusion of space within the featured collage in light of some of these concerns. (BJS)