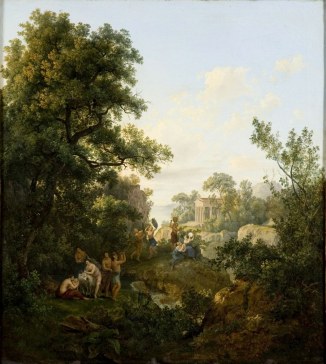 During the 1830s an art scene in the modern sense developed in Hungary. At this time a school of Romantic and Neo-Classicist landscape painting emerged around the Markó family, the patriarch of which was Károly Markó Sr. Given that Birth of Bacchus is an early masterpiece by Károly Markó Sr., it can be considered one of the first important modern Hungarian paintings. Markó Sr. spent much of his career in Italy, though he continued to work, exhibit and sell in his native land. Many of his works depict Classical landscapes that exude the nostalgia that West and Central European artists felt for the bygone “Golden Age” of Greco-Roman culture, and for its modern equivalent, Italy. Upon acquisition by Ambassador Salgo at Sotheby’s London in 1985, the painting’s title had been forgotten. Through careful research of the literature, this work has been identified as the lost masterwork Birth of Bacchus. A nearly identical version of this painting, also entitled Birth of Bacchus, has recently surfaced in the Gábor Kovács collection in Budapest, the largest private collection of works from the Markó dynasty in existence. The question as to which is the earlier version is still open, though it is the Salgo Bacchus“ that is dated by the artist. The Salgo „Birth of Bacchus,“ as well as its historical frame, have recently been cleaned and conserved, restoring this superb object to its full glory. (OB)