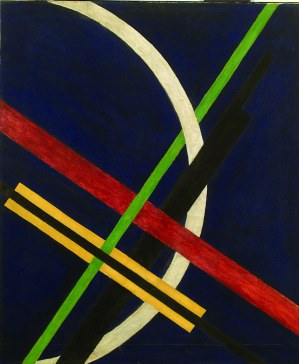 This two-sided painting, made while Moholy-Nagy was living in Berlin, is an important document marking the transition from Moholy-Nagy’s own particular brand of Dada art making to his emergent International Constructivism. Architektur 1, also referred to as Konstruktion auf blauem Grund in one of the Der Sturm exhibition catalogues, constitutes a step beyond the paintings shown in the February 1922 show at Der Sturm in Berlin. In its radical lack of traditional depiction and spatial strategies, it constitutes a kind of manifesto of the genre of painting that would come to characterize Moholy-Nagy’s oeuvre for much of the remainder of his career. With its deep blue ground overlaid with geometrical bars of green, red and yellow, as well as black and an unidentified metallic pigment, Architektur 1 / Konstruktion auf blauem Grund was radical in its insistent denial of Expressionist, Cubist, Futurist and Dada modes of pictorial syntax, that is, at that time and that place, in its insistent newness. Within Berlin avant-garde circles, in which news of Russian Constructivism was spreading by word of mouth at this point, it would have impressed with its resolute stylishness, its up-to-dateness. Moholy-Nagy’s rejection of the Dada-period work on its verso (revealed by the Guggenheim painting restorer at the time, Carol Stringari), spoke of his own awareness of the importance of this shift. The contrasts between the two works were substantial. Whereas the rejected painting contained within it traces of the representation of traditional perspectival space, Architektur 1 was programmatically devoid of such representation in any obvious sense. By extending the bars and arc of colour (that conjoin to constitute the „Konstruktion“ of the title) up to and thus “beyond” the edges of the canvas, Moholy-Nagy did not emphasize the idea of a floating assemblage the way that Lazar El Lissitzky did in his Proun works, or indeed as Moholy himself did in most of his own subsequent International Constructivist works. Rather than by means of perspective, spatial depth is suggested by a given band of color appearing as woven over or under another or, to a lesser extent, by the push-pull qualities inherent in certain given colors. […] Architektur 1, perhaps for the first time in Moholy-Nagy’s career, embodied a complete rejection of traditional figuration.