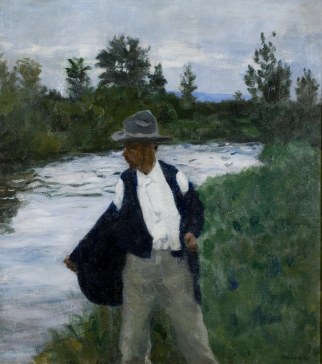 Along with Szinyei-Merse, Rippl-Rónai and László Mednyánszky, Károly Ferenczy is considered one of the most important pioneers of Hungarian Modernism, and Hungarian art historian István Genthon, author of Ferenczy’s catalogue raisonné, referred to this work as one of the “pearls of Ferenczy’s plein-air oeuvre.” Ferenczy studied in Paris at the Académie Julian with Robert-Fleury and Bouguereau from 1887 to 1889. After a stay in Hungary, Ferenczy moved on to Munich in 1893, where he befriended Frigyes Strobentz. By the mid-‘90s there was a move among Hungarian painters living in Munich such as Ferenczy, Simon Hollósy, János Thorma, and Béla Iványi-Grünwald, to found an art colony at home that would develop a specifically Hungarian painting, paralleling efforts in literature, architecture, and music. This colony was founded at the remote Transylvanian mining town of Nagybánya in 1896 where the artists developed a programme of modern Hungarian art oriented towards the depiction of its land, people and customs. Given the Munich origins of the colony, its plein-air approach was as strongly affected by Pál Szinyei-Merse’s pioneering efforts in this vein as it was by French practice. And within French art, Bastien-Lepage’s “Naturalist” art was as influential, as were the Impressionists. Before a Swim was one of twenty paintings completed by Ferenczy in 1904, his last full year painting at Nagybánya, and the year he won a bronze medal at the St. Louis World’s Fair. It depicts a Roma man undressing for a dip in the local Plissza creek near Nagybánya, one of Ferenczy’s favorite spots for painting. He employs generously loose, expressive brushstrokes in this work. From this, it has been suggested that it is a sketch for a slightly larger version of this painting, formerly in the collection of Baron Kohner (104 x 107 cm.). However, it hardly seems likely that one would paint a sketch at 90% of the dimensions of the finished work. And indeed, the artist himself remembers that “in October I suddenly did the swimming man, and sold it in two copies.” While not painted in as high a chromatic key as some other of his works of this period, “Before a Swim is nevertheless light in palette, and comprises an elegant two-tone essay in color relationships, rendered as it is in greens and blues in addition to white, black and gray. It nonetheless represents the end of an era at Nagybánya: the following summer, the “Neos” (Hungarian Fauves) would burst onto the scene at the art colony, introducing the bright hues of the French avant-garde of the time. Originally in József Lukács’s collection (father of philosopher Georg Lukács), the whereabouts of this work and its other version were unknown for many decades before this piece was acquired by Ambassador Salgo through Sotheby’s London in 1985. (OB)