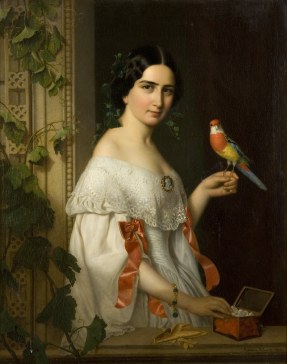 Originally from Baden in Austria, August Canzi studied with Jean-August-Dominique Ingres in Paris before moving to Pest (later Budapest) in 1846, where, over the next two decades, he became one of the best Hungarian representatives of late Biedermeyer portrait painting. Often working in miniature, Canzi also tried his hand at Daguerreotype portraiture, a not unusual pairing of medial practice at the time. This beautiful image of a young middle-class woman shows the strong effect that Ingres had on Canzi’s style, and is considered to be one of the artist’s masterpieces. It is surely one of the finest of late Austro-Hungarian Biedermeyer portraits. Acquired by Ambassador Salgo at auction in Budapest in 1985, it is known that he was in competition for this work with the Hungarian National Gallery, which, as we have since learned from Dr. Zsuzsanna Bakó, the curator at the time, was very keen to acquire it. (OB)