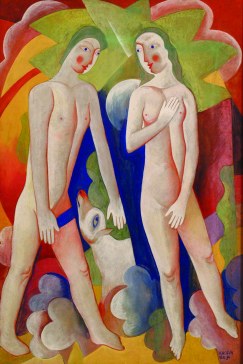 Kádár was one of the “Neos,” Hungarian Fauves at the Nagybánya artists’ colony in the early teens, and he later took his art in an avant-garde direction. Kádár’s paintings of the early 1920s show close affinities with the whimsical, folk-art-inspired work of Marc Chagall and Heinrich Campendonk. As the art critic and Moholy-Nagy’s close friend Iván Hevesy wrote in a review of Kádár’s show at the Ernst Museum in Budapest early in 1918, Kádár’s work is characterized by “a search for pagan, barbarian joie de vivre, passionate animation and monumental rhythms.” Given that both Chagall and Campendonk were represented by Herwarth Walden at his legendary Galerie Der Sturm in Berlin, it is not surprising that Kádár became one of Walden’s featured artists during the 1920s. Acquired at Phillips, London in 1987, this fine enlargement of a small watercolor composition of a nude couple by Kádár is one of his most attractive works of the early 1920s, and, not surprisingly given its Art Deco stylistic features, one of the most popular works of the Salgo Trust collection. Often identified as being an image of Adam and Eve, this thematic identification is called into question by the presence of the canine or bovine animal figure at the work’s center, not an animal that makes an appearance in the Genesis story of the first couple. Given the whimsical nature of many of Kádár’s works, however, such an un-canonical interpretation of the Biblical story is not to be discounted, and indeed canines make frequent appearances in his religiously themed works. It is only recently that art historian Mariann Gergely has recovered the lost title of this work, through the discovery of a period photograph of it. (OB) 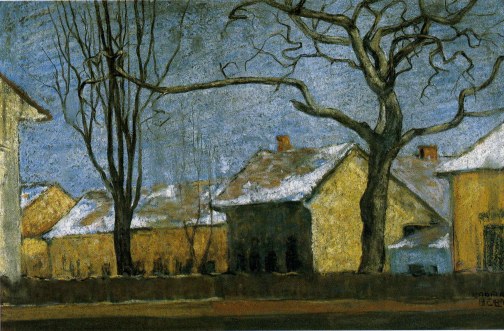