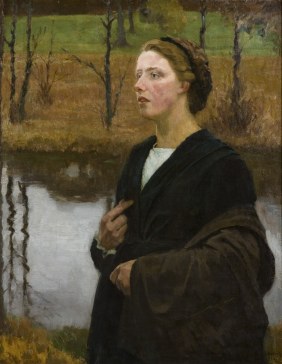 A pioneer of Hungarian plein-air Modernist painting, Strobentz was known for his images of mysterious women, such as his Stroll of 1894 and Adagio (both now in the Hungarian National Gallery), and Lady in a Pink Dress“ of 1906. Like Munkácsy, he studied first at the Düsseldorf Academy (starting in 1877), transferring to Munich in 1880, where he spent the remainder of his life. He went on a study trip to Paris in 1887 with his close friend Adolf Hölzel, an artist who became important to the development of German Modernism. In Paris, Strobentz fell under the spell of the French Naturalist Julien Bastien-Lepage, the imprint of whose work remained with him for the rest of his career. An important figure on the Munich art scene, Strobentz was a co-founder of the Dachau Artists’ Colony and the Munich Secession. Later he worked in association with the outstanding Munich Symbolist painter Franz von Stuck. Stuck’s mystical inclinations are certainly in evidence in this image of a woman in a landscape setting. Strobentz’s association with the Munich Secession assured for him a successful career in the Bavarian capital, whence he sent pictures regularly to be shown in Hungary. He had joined the Hungarian Art Association as early as 1888. A retrospective of the publicity-shy artist’s work was held at the National Salon in Budapest in 1904, an event that enjoyed enormous success and that cemented his reputation in Hungary. Indeed, in 1907 – along with Rippl-Rónai, Pál Szinyei-Merse and others – he was invited to be a founding member of MIÉNK (Circle of Hungarian Naturalists and Impressionists), the exclusive organization of the first generation of Hungarian Modernists. No less important a critic than Károly Lyka compared him to Károly Ferenczy. (OB)