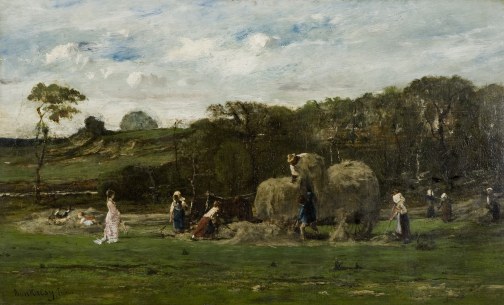 In the 1880s, Munkácsy became the first international Hungarian art star. But like a number of art stars, his rise was as precipitous as was his subsequent eclipse from the international scene. His works commanded enormous sums in his prime: John Wanamaker, founder of the famous Philadelphia department store, paid over two hundred thousand dollars for Munkácsy’s monumental Christ Before Pilate and Golgotha in 1887-88. Like a number of Hungarian artists of his generation, Munkácsy began his artistic studies in Vienna, and continued them at the Düsseldorf Academy, where a number of American artists also studied. While Munkácsy’s early works were political in the manner of Gustave Courbet’s Realism, ennobling the downtrodden, by the latter part of the 1870s, he had entered into a contract with the enterprising art dealer Karl Sedelmeyer, who encouraged him to produce paintings that would appeal to the Parisian bourgeoisie. While many of these are merely pretty, Loading Hay is exceptional for the quality of its brushwork and for its representation of a curious confrontation: A fashionably dressed young woman contemplates a group of sunburnt peasants. Though reminiscent in theme and composition to (and perhaps inspired by) Courbet’s Young Ladies From the Village (1852), the contrast between the classes is even starker in Munkácsy’s work, and there is no hint of caricature in the depiction of the young lady, raising interesting questions about Munkácsy’s political intentions at the time. The canvas’s theme is certainly unique in the artist’s oeuvre. This work has been featured in a number of important exhibitions, including Munkácsy’s retrospective at the Hungarian National Gallery in 2005, where it appeared on the cover of its exhibition catalogue. (OB) 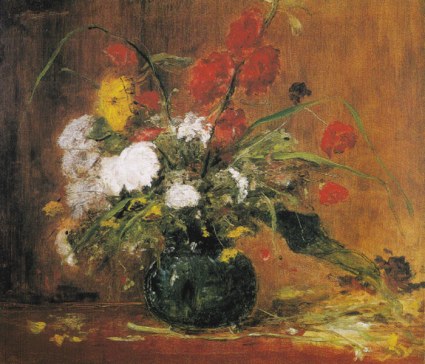 The painting known as Flowers in a Blue Vase, the vivid yet delicately rendered work seen here, is a fine example of Mihály Munkácsy’s still life painting of the 1880s. Here, in the vibrant contrast of green and red, one can witness the brightening of Munkácsy’s palette, which took place during the 1880s. One might also observe the confluence of styles that typifies Munkácsy’s oeuvre, the manner in which he straddled the spheres of Academism and Naturalism. Notably, in the late 1870s, Munkácsy devised a new genre that integrated salon painting and landscape, as seen in his Peacocks of 1878. Munkácsy has been examined in relation to the juste milieu painters of late 19th century France by art historian Judit Boros. This category encompasses artists who did not firmly ascribe to either Academism or Modernism (as exemplified by the Impressionists) in terms of style, emphasized aesthetic qualities over style, and adopted a lifestyle amidst the liberal coteries of the European bourgeoisie. Munkácsy has also been considered in relation to Modernism, with attention paid to connections with Symbolism, Expressionism and Impressionism. His work has been compared to that of the Barbizon School in its loosened mark-making and deliberately indistinct rendering of objects. The loose brushstrokes of Flowers in a Blue Vase are an excellent example of this tendency.

Flowers in a Blue Vase represents the second phase of Munkácsy’s successful career. Celebrated as a foundational figure of modern Hungarian art, the artist enjoyed acclaim by the time this work was painted. Orphaned as a child, Munkácsy began his life under impoverished conditions. In 1861, he ended a brief and difficult turn as a joiner to embark on an artistic career. Munkácsy apprenticed with Elek Szamossy, and was introduced to Antal Ligeti, Director of the Gallery of the Hungarian National Museum. With assistance from Ligeti, Munkácsy attended the Academy of Fine Art in Vienna in 1865, followed by further training in Munich and Düsseldorf. The artist’s reputation developed gradually during this period until he met breakout success with the painting The Last Day of a Condemned Man in 1869. Produced within the mode of Realism, Munkácsy’s early works exert a critical tone, with subject matter often drawn from his childhood experiences and the Hungarian War of Independence of 1848. The dramatic tension within these works is emphasized by the artist’s juxtaposition of dark and light hues. Munkácsy relocated to Paris in 1872 and befriended the Baron and Baronesse De Marches. This marked the beginning of the artist’s commercial success and fame. In 1874 Munkácsy married Cécile Papier, then widow of Baron De Marches, and thus came to enjoy the social status of a member of the Parisian upper classes, with its attendant financial ease. In 1878, he signed a ten-year contract with the ambitious art dealer Charles Sedelmeyer and as a result many of his works, particularly his large-scale genre scenes, were exhibited internationally to much fanfare. Driven by a new stream of haut bourgeois clientele, Munkácsy received many commissions to paint floral still lifes during the 1880s. Indeed, at this time, his focus shifted from Realist subject matter to salon paintings, portraits and still lifes. (BJS) 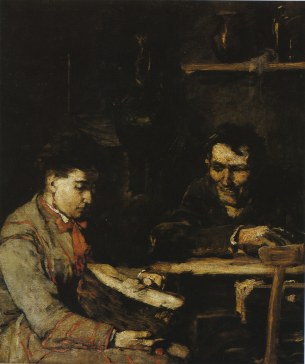 Munkácsy studied at the Vienna Academy before going on to Munich in 1866. He encountered the work of the French Realists at the 1867 Parisian International Exposition. He moved to Düsseldorf to study in 1868, and again saw Realist works with László Paál in Munich in 1869. Munkácsy had been captivated by the work of Frans Hals and Rembrandt while on visits to Holland. These influences were brought to bear in this painting, inspired by a poem penned by the national Romantic poet Sándor Petőfi, and produced after the artist’s move to Paris in 1871. Indeed, in its unremitting Critical Realism and heavy impasto, it is a precursor of the work of Van Gogh at Nuenen. (OB)