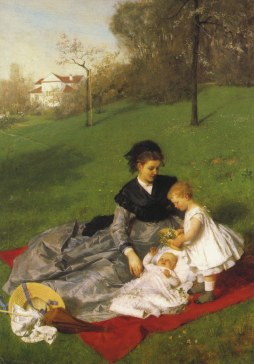 Sold to an American collector straight out the studio, this work disappeared from view and was believed to have been lost for over a century. It was sought after by the painter himself. Mother and Children surfaced in a private American collection and was purchased in 1991 by Ambassador Salgo from the New York dealer Ira Spaniermann. Scion of a gentry family, Pál Szinyei-Merse, like many Hungarian artists in the 1860s, went to Munich to study art with Karl von Piloty. There he undertook this experiment in plein-air-based painting that paralleled the early efforts of the Impressionists, rendering him the first Hungarian Modernist. This painting was the first of the series that would lead to the artist’s undisputed masterpiece, his Picnic in May of 1872, now in the Hungarian National Gallery. „Mother and Children“ is still almost fully Naturalist in style, though there are touches of more expressive brushwork in the treatment of the flowering trees and the Manet-like still life of a straw hat, parasol and cloth at the lower left of the canvas. Most of all, the electric complementary contrast of the scarlet blanket and green grass, as well as details such as the still life at lower left, call to mind contemporary French experiments. (OB)